The pass I’d given myself to wallow, read, sleep, and grieve, expired its “use by” date about a month ago.

Somehow things suddenly kicked into high gear a couple of weeks ago and my mind and body filled up the space and time I rent from the life library. I went back to the gym, put away my pile of “to read” books, started a new volunteer project, began cooking dinners, even made bread, and made headway with the  stuffpiles that inhabit every room in the house. 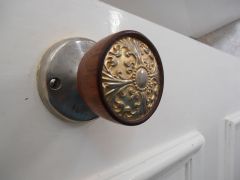 In other words, my life shifted into a new normal. At least I thought so.

Two nights ago, MSH said something completely innocent and ordinary, and with his words the doorknob to my emotional storeroom clicked.

The air changed not in a physical sense, but just as clearly as the temperature and smell in a house changes when a door gets left open in midwinter, I knew something was different.

I felt the loss of my best friend as raw and new as January. Instantly.

That emotional door allowed an onslaught of emptiness and loss to escape. I could no more push it away than a person can shove the cold air back outside and slam the door on it. The cold inhabits the room. It takes time and effort to reheat the inside air.

It’s not like I’m constantly thinking about her. Not at all. It’s more like her absence inhabits me. How does an emptiness fill something? I have no idea. I just know that’s what it feels like.

There’s a mental numbness involved as well. I find myself not engaging in conversations, barely following the words, the back and forth of it. My body’s in the room, but my mind, my focus, simply isn’t anywhere.

What do I do about it?

Or maybe I need to not do anything. Maybe I give myself over to the feeling of loss, all over again. Sit in my porch swing and stare, again. Cry randomly, again. Pray more than normal, again. Muster up energy to respond to texts and emails, again. Sleep way too much, again. Stand around aimlessly and unproductive, again.

I’m guessing this sensation will go away eventually. I’m expecting that writing about it, out loud, here, might help.

It might come back again, too. I think grief does these looping things. It’s not a linear, stage by stage processing of the loss, but a kind of wandering path of varying emotions or lack of them. Occasionally the paths cross, I wander on to a different one without even realizing I’ve changed direction.

Don’t get me wrong.

Wow. That sounds horrible. It isn’t as bad as it sounds, but then it isn’t really great either.

“Grief is a multifaceted response to loss, particularly to the loss of someone or something to which a bond was formed. Although conventionally focused on the emotional response to loss, it also has physical, cognitive, behavioral, social, spiritual, and philosophical dimensions.” ~Wikipedia

It’s today’s normal for me. And apparently yesterday and the day before. Maybe tomorrow and the next. We’ll see. Like a lifeboat on the ocean I’ll just drift about and see where the current takes me.

In the meantime, I’ll do my best imitation of a normal person when I’m in public.

There’s this last thought, which I like because it feels hopeful, and it acknowledges that there’s a process in play that I can give myself over to.

“Not knowing when the dawn will come I open every door.” ~ Emily Dickinson